Moaning vs. Being Constructive or Woe !!! the Cuts!

That is more than a decimation - and those proposing these cuts must feel that the workforce are not performing adequately. We'd rather predictably say - it's not enough. Some attention must be given to altering the way this organisation goes about it's duties - and it's duty not "business" that constrains the activities of a statutory body.

Given what we've learnt is the last four years it's simply indisputable that The Environment Agency is plumbing the depths of dysfunctionality - even for an overstuffed "free range" quango. The overblown EA has essentially lost its way and lost effective collaboration with the population and especially those unfortunates "regulated" by it. It presently exists in a suffocating, self regarding la-la land where it's becoming clearer than ever that a quite dizzying variety of abuses are commonplace and embedded in the present organisational culture. In some cases those attributes are being promulgated into spawned client / semi detached organisations...

The phrase "root and branch reform" rather unsurprisingly comes to mind. It's very clear from the insights provided by Henry (and others via personal contact, phone and email) that overstaffing and ineffective management have combined to cultivate idle indulgence and that an almost complete absence of discipline has enabled individual officials to exercise arbitrary power when it is neither legally sanctioned or - in fact in most cases even remotely appropriate at the outset of a problem being identified (or, 'pon occasion created).

This "quiet start" has been made by instructing the EA to trim its workforce  - however, it utterly fails to address what we already know to be damage done to individuals, organisations and businesses which are subject to the EA's presently malign influence. EA misbehaviour must be addressed. It's interesting to note in the linkedarticle above that Craig Bennett, Friends of the Earth  (tag:"Seeing Things Differently" ) director of "policy and campaigns" commenting / lamenting on "the cuts" has a woefully shallow grasp of what's involved here.

We know some folk in the higher reaches of Whitehall and in the political parties drop by here and we'd like to send a very clear message - and yet again - we say - it's time to clean out the stables. The Office of The Parliamentary & Health Service Ombudsman , The UK Parliament Public Accounts Committee  and last but not least The High Court (both Criminal and Administrative divisions...) should be a places of absolute last resort and not the only recourse to remedy for petty wrongs perpetrated by public servants. A parliamentary investigation seems entirely appropriate.

The EA does do some things right - but that does not justify them in any way ignoring and being totally obstinate about putting right what they do wrong.

We know that internally there's discontent at the management culture, there's bad behaviour, there's discontent out amongst the regulated, there's overmanning, there's inefficiency and there's alarming lack of competence in key areas and an unhealthy appetite for the shameless fabrication / invention of justification in senior management.

It's in the consultation phase - but we're working up a survey about attitudes and possible remedies to the present untenable situation across the EA's activities - not just hydro power.  Trade associations, NGOs, environmental media outlets and last but not least EA employees will be invited to participate = don't hold your breath!

Decimation is not enough - somebody is going to have to knock the survivors into shape - and there has to be a plan for that shape - because if the culture doesn't change you'll just have a smaller version of the original and that patently won't be any good at all....

15%? - will that be by  lottery?   The decimation procedure was a pragmatic attempt to balance the need to punish serious offences with the practicalities of dealing with a large group of offenders...

EDIT
It's worth noting (via comments) that the English EA (i.e. leave out Scotland, Wales and Northern Ireland) has a bigger staff that all the other EU members environment agencies combined

It would seem ...  that somebody's not happy with us.

Under normal circumstances we'd be a bit more conciliatory about offending other people's sensibilities (no.. really, we would...) - but - as promised a while back - after 4 years of this stuff - we've truly had enough of the cavalier, indifferent attitude to truth and diligence that has characterised EA senior management's monumentally self regarding approach to discharging their statutory duties as public servants in the matter of water licences at Avoncliff.

Some people either have the attention span of a goldfish or they've been indulging in undiluted mendacity on an industrial scale possibly with a view to provoking a response........ 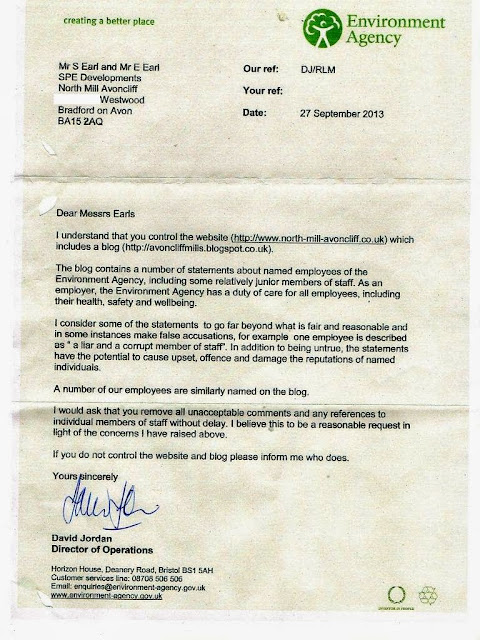 We do not make public allegations that we cannot evidence and that are gratuitously defamatory and we take gross exception to people acknowledging wrongdoing, promising to do something about it and then reneging on those promises multiple times no doubt in the hope/intention that time will dim down the issue and "normal" operations will continue unaffected .

OK - here's the response...!
(Blogger's graphic viewer isn't very nice - so if you want to see all of this in one document
click here for a PDF viewer )

The normally placid and serene Celia dashed the missive below off in less than 20 minutes - she is well versed in the to-ings and fro-ings - having suffered / lived it quite quietly for 4 years.... without popping her head over the public parapet :-)   I think the frustration is palpable :-) 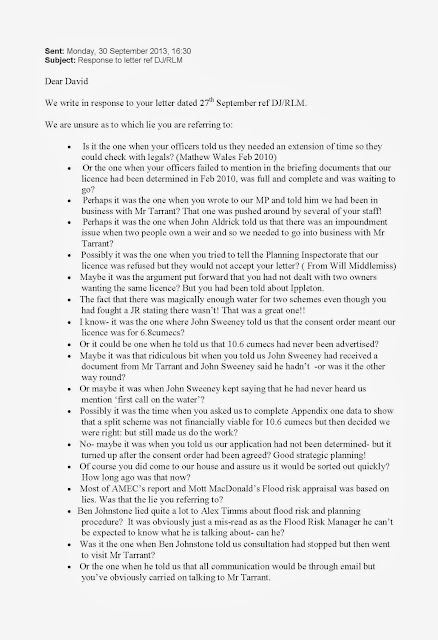 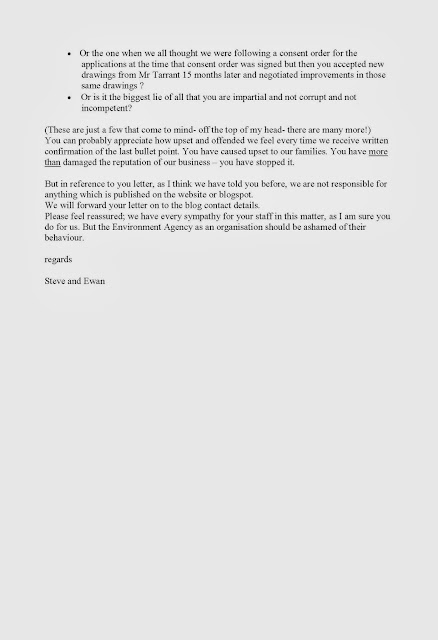 And just so's the interwebs can find it - a composite PDF of this correspondance is linked here so that Google , Bing and DuckDuckGo can find it (once it's indexed)

I think the return rattle broke the sound barrier :-)

EDIT
In view of some things that have come to light in the comments = it looks like time that somebody with an actual mandate to settle things from the EA side of this had better be dispatched down to Wiltshire  dragging his/her/their battered EIIR briefcase(s) with them. There is more woe rumbling down the tracks for officials at the EA and they still have the possibility to avoid a messy train crash.

Well, it's not everybody's cup of tea and it's minor league techy - but I was a bit surprised getting a Tweet from The Environment Agency inviting me to apply for a job. (£150,000 a year, 3 day week , expenses, lease car, flexitime and a generous pension will do - thank you in advance)

I was intrigued by their use of the i-grasp web address (which actually didn't work with the link embedded in the Tweet - not a reassuring start, but sadly par for the EA course) - that url is loaded with other meanings especially for the waste handlers and recyclers we know come to the Avoncliff Mills blog for a bit of light relief and to vent a bit..... 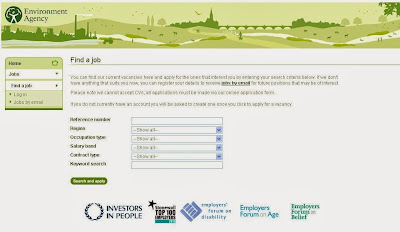 Onwards ...  the employment page taken literally would seem to infer some initial preferences in terms of employment candidates skill sets - employee attributes that whilst laudable and no doubt aligned with a sense of social responsibility should be tertiary to selecting the best candidate for the job - and should be applied at the end of the selection process between otherwise equally suitable candidates. Presenting these criteria at the outset is wrong , discriminatory and conflicts with several statutory duties the organisation is supposedly obliged to discharge - but as we know - conflicted decisions and dereliction of statutory duties litter the EA landscape without much actually being done to clear up the mess. However - it does look like the logo-soup was used to select the chairman.

The logo shower at the bottom of the i-grasp (Apple™ obviously missed a trick there)  EA employment portal page and the failure of the Twitter link to actually link to a listing of available positions is simply another albeit trivial but real manifestation of the woeful competence we see from this organisation.

The incumbents are obviously not so stupid as not to see that the public perception of the EA is suffering and are ... quietly preparing a shell game  some of the details of which are covered in the EA triennial review document HERE (pdf) - frankly, looking at the proposals it looks like an attempt to even further attenuate public budgetary accountability and "outsource" the enforcement activities - which will suit the spendthrift self regarding passengers on the present gravy train just fine.

Something does need to be done - and they know it  - but predictably they aren't interested in providing value for money and actually delivering the services outlined in their statutory obligations to the people forced to pay for them. Creating "Trusts" is where they're heading - given the EA's performance - trust can be added to the miserable lexicon of words devalued beyond recognition by those in positions of actual public trust.

This is set to run.

EDIT: In the meantime Richard Benyon and David Heath - both in a way responsible for controlling the Environment Agency have both been replaced in the latest (Oct 2013) ministerial reshuffle / deckchair adjustment exercise. We hope that their successors use their power and do not take the blandishments and fibs that they're briefed with at face value.