DEFRA Acknowledge "EA out of control"?

Maybe I'm willfully reading too much into this - but if they mean what they say (and that's not totally clear :-), then some scrutiny of what's going on at the EA is coming down the tracks...

By Isabella Kaminski
DEFRA is to give the Environment Agency and Natural England a stronger steer on their priorities at the start of each financial year.
The move is revealed in the department's latest improvement plan, which describes an elaborate set of changes to how it and its regulators function. This includes a new top-down approach to designing policies and allocating resources.
DEFRA denies the changes will compromise its regulators’ independence. But this assertion jars with the tone of the document, which says DEFRA and its “wider family” will operate increasingly as “one business” with a “single voice” that is more “strategic, flexible and resilient”.
It is a similar language to that being used at DECC.
According to the improvement plan, DEFRA’s board has decided it needs a better overall picture of what is happening throughout the department and its arm’s length bodies.
The plan says DEFRA will start setting priorities across the whole department “to avoid ‘gold plating’ of some customer services, policy and evidence”.
As well as bringing together structures, systems and processes, it wants to introduce clearer responsibilities for senior staff, eliminate duplication and provide “appropriate independence” for statutory bodies and functions.
This means it can “sharpen decisions on priorities when resources are tight” and will be “better at flexing resources to deal with an emergency because we have a system-wide understanding of where they are”.
Natural England and the Environment Agency have already been told to work more closely together and the department is making significantreforms to environmental reporting to avoid duplication.
DEFRA also wants a simpler accountability structure. Following their joint triennial review, the heads of the Environment Agency and Natural England were required to report directly to the secretary of state.

Key to achieving these aims will be a “new HQ commissioning approach, replacing ‘bottom up’ or incremental approaches to policy design and resource allocation with stronger direction and strategic reprioritisation”. This is being piloted with the Environment Agency and Natural England.
When asked to elaborate, a DEFRA spokeswoman said this meant the department would outline regulators’ priorities at the start of the financial year, rather than throughout it.
She suggested this would be a matter of timing rather than a fundamental shift in how things are done. “It means DEFRA will give a clearer strategic steer or ask at the start of the corporate planning cycle. By doing this, the ‘network buddies’ should have greater certainty of priorities.”
The approach will be evaluated in July to see whether it has helped the regulators develop their corporate plans for 2015/16 more quickly and efficiently.
The spokeswoman said resource allocation would “remain a matter for the bodies” and denied the changes would alter or compromise their independence. But it is difficult to see how this would be the case in practice, given that DEFRA is taking such a top-down approach and its explicit aim of reprioritising resources across the department.
The improvement plan recognises that to achieve its aims it will need a “realistic plan of action, which takes people with us”. “Financial pressures are a key driver of reform, but this agenda is not ‘just about the money’. Neither is it ‘just about survival’. It’s about future success.”
As such DEFRA is seeking to enact culture change within its ranks. This was one of the aims of the ‘red-tape challenge’.
A strategic reform plan published in April says it has introduced a new system, Policy Implementation Management and Made Simple (PIMMS), to “improve and support greater openness within DEFRA’s policy development process and a more consistent approach across the organisation.”
This includes new policy appraisal statements to formally start new policies and impact assessments.
It will also set up a ‘policy tracker’, which will be the single database of regulatory and non-regulatory policies. DEFRA says this will improve the quality of reporting to senior managers and their ability to prioritise activities and resources.
It also promises new training programmes, drop-in sessions, workshops and internal communications, complemented by improved internal guidance.

We saw this and wondered if it was coincidence that there was a police presence whilst Mr. Jordan was visiting Somerset yesterday? 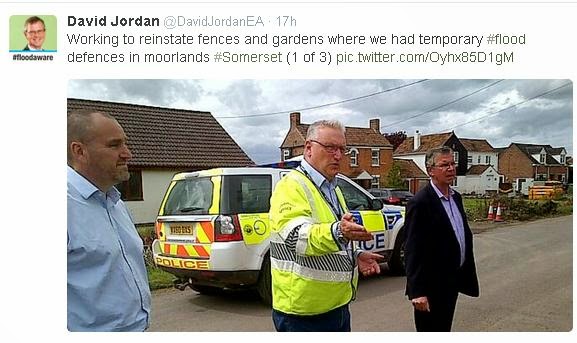 It's clear that the EA have a way to go if they are to recover the confidence of inhabitants of the Somerset Levels - really - is this just coincidence? - or does it illustrate some jitteryness about the quality of welcome for senior EA officials down there? An inept bit of photo-op or a not so subtle signal to the uppity natives ?

We wonder where Richard Creswell has gone - the EA SW regional director covering the Somerset area is essentially MIA and seems to have been quietly disappeared - one wonders if he's been gagged and paid off  like so many folk involved in EA shennanigans...  how much we wonder?

Mr Jordan seems keen to be seen associated with "gifts to the natives" - but rather less keen to address the consequences of his actions in the matter of Somerset Levels drainage management in the past eh?

George Monbiot has a piece about official impunity from the consequences of their actions up at the moment in The Guardian that I feel is relevant and worth a read ....

and finally, other more trivial news...  Environment Agency signs tell truck drivers to simultaneously  turn both left and right at access point to flood alleviation scheme (h/t Henry)  - we know EA officials like to have things everywhichway - but a step too far in this case :-)