Headache? believe what you read in newspapers?

Whilst not directly to do with hydroelectric power or even the Environment Agency (although they've precipitated a few headaches here!) - I spotted this yesterday and it struck me as indicative of the way our public servants account for how they spend our money and how it's reported. I daresay many clinicians actually working in the NHS would likely roll their eyes skywards and shake their head at the numbers involved and make a sighing noise.....  since there is obviously something wonky going on  - but  The Daily Telegraph is quoting the notional cost of prescriptions issued, not the cost of prescriptions redeemed.  Hardly due diligence on the part of The Telegraph which used to be a "quality" newspaper.....

"The NHS purportedly spends over £80 million each year handing out paracetamol with the average prescription costing 20 times the price of a packet of the simple painkiller in the supermarket."

This year 22 million prescriptions for paracetamol were written at a notional cost to tax payers of over £80 million pounds – an average cost of £3.67 per prescription.

This is a 13 per cent increase on last year when £73.5million was spent on the medicine, Government figures issued in a written answer have shown.

The gory details and lame excuses from the administrators are here in a Daily Telegraph report.

It just strikes me that as it's a generic over the counter drug that looks like it could simply be given away by doctors and hospitals without the expensive (and time wasting) shenanigans of the present documenation.  Albeit it's a drug that stupid people try to kill themselves with on occasion...

Some people give Paracetemol another "technical" name - and proceed to unscrupulously sell it at a much higher price....  that might be a better story for the Telegraph - but then that would involve some research and erm... thinking.

If you thought it was a bit nippy today....

it looks really cold over the next few weeks and the prognosis for early next year is shaping up to be dang cold too.... (I know it's winter - but if you read the Guardian => snow is a thing of the past....)

Some snow is on the way - predicted by the man who reputedly is banned from betting on the weather by Ladbokes (who just love the UK Met Office.) 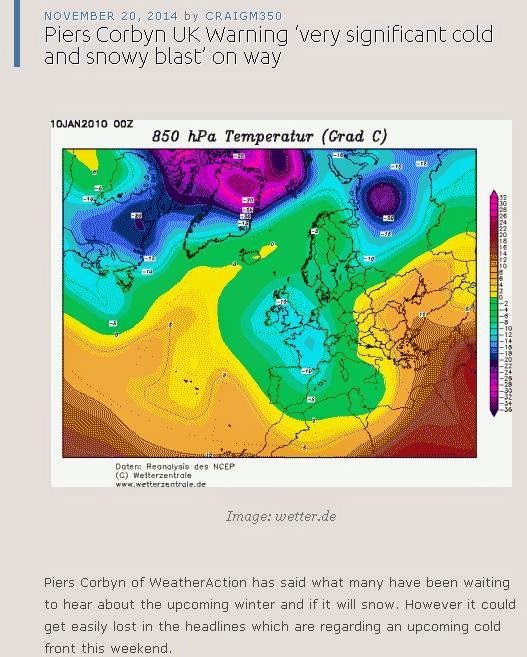 No doubt some dumb PR will emanate from The Environment Agency as a result of bad weather and the Met Office will keep making the customary lame excuses....

This is not the Owen Paterson fan club - but the ex senior minister responsible for The Environment Agency  has made another speech  / another review   + video in the works...) which is worth having a look at - mainly because it's evidenced and reasoned - unlike the outpourings of almost every other pol at the moment - and that includes UKIP.  The previous post here on a Paterson speech picked up a surprising number of hits .... 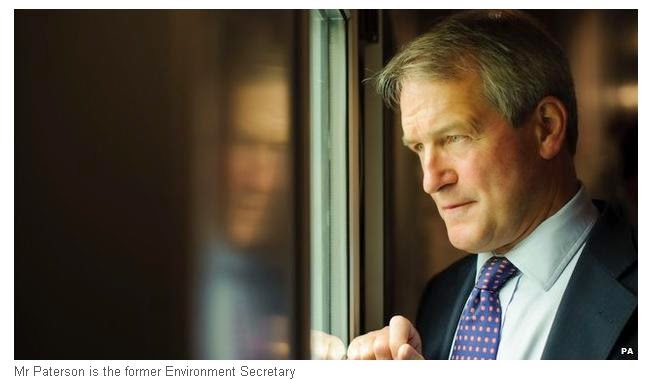 Click the pic for surprisingly long BBC review
tucked away from view I'd say.....

And now for Something Completely Different

One hears them whistling overhead -
but the scale of it when seen in perspective is amazing.

And even higher up...

Astronaut - A journey to space from Guillaume JUIN on Vimeo.
Posted by Tom at 23:34 0 comments

Glow in the Dark

According to a commenter at the Bishop Hill blog -

Western Power are dispatching glow in the dark fridge magnets  (7.8 million of them apparently). Given the parlous (although not catastrophic yet) state of electricity generation in the UK - it's a pretty farcical thing to do IMO....

There's a blogpost over at Tallbloke's Talkshop that both pro and anti wind farm folk would do well to read.

It is supposedly possible to generate 11GW from the windmills we've already in place - but the total going to the grid never seems to go over 6GW (I'd seen that and wondered...)  - what's going on... why is that?


Clive Best -
Something Fishy in the Air
Posted by Tom at 23:44 0 comments

Environment Secretary Liz Truss has been down to Somerset again - and it would seem she's poster girl for the EA  The article covering Liz's visit in the Western Morning News quotes (from the EA we have to assume) that :

"More than 130,000 million cubic metres of silt have been extracted in the £6 million exercise and used either to improve local arable land or build up drainage banks".

Which is pretty astounding value for money and a near miraculous engineering achievement - that'd be a cube with 3 mile sides..... yes - quite astounding from 5 miles of 20 metre wide river - somebody can't count.....(it's the Western Morning News by the look of it!) 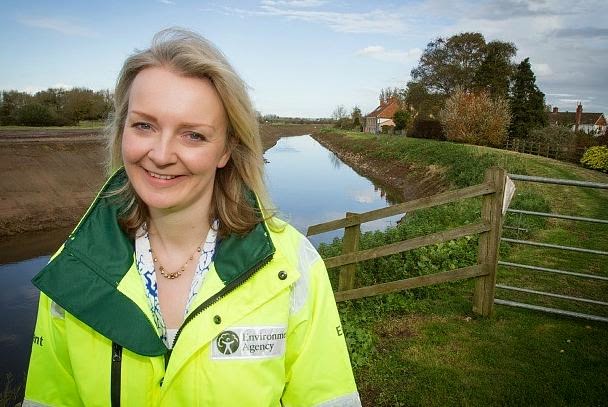 We think she would have been well advised to bring her own outdoor attire .... Cheap shots aside - it's obvious the EA want to keep control of drainage in the area and standard delay tactics are being deployed - which quite predictably have got the local MP going  - and Ian Liddel Grainger has been on local TV giving voice to concerns that commitments made earlier are being "slow tracked" - and we have to assume that The EA is true to form - gaming to retain / cling on to control in Somerset.... Considerable manoeuvring behind the scenes, out of public view on this one we'd reckon.

Well....  we know here that at the very least half the £3 million funding for Somerset Rivers Board has been spent - making a colossal foul up on the River Avon in Wiltshire at Avoncliff weir

- and it's still ticking up every month...

Meanwhile ....  Liz's predecessor seems to be shaping up to be a thorn in the side of the present Tory front bench crew via  http://www.uk2020.org.uk/  who already it would seem - have The EA in the crosshairs......