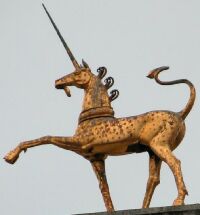 The  SUN and the Daily Mail are squawking about Sir Philip Dilley being on holiday at Christmas ...  not an unusual thing - but....

It is notable that no other senior management have ventured outside the lavishly appointed PR bunker with 350++  stout defenders manning the Twitter, Facebook and Instagram barricades.

Apparently one can take a picture from a certain angle that makes Bristol Council House unicorn appear to be on top of The Environment Agency HQ building - which seems entirely appropriate since the flooding is being blamed on unicorns by many commentators...

Sir Philip Dilley is reputedly an engineer (Arup Partners) - it would be refreshing (but extremely unlikely) to hear him say some engineer-y things about the floods.

I think we all know the unicorn will get the blame.