Computers! ... the post about CO2 in the atmosphere disappeared into digital smithereens - and its loss serves as a lesson about composing content on-line :-/ (I do know better but sloppiness about keeping copies sometimes is irresistible)

It'll be re-posted (after being re-composed off-line!)

In the meantime - the tedious and increasingly bonkers and dishonest parade of  climate claims fills our media in the run up to the Paris Climate COP21 conference.


Here's my contribution for this week:


Arctic Sea Ice is at the greatest extent for a decade


That's something you will NOT read in the newspapers of hear from our broadcasters....

Some - (Hello... BBC , Guardian, Independent) repeatedly said Arctic sea ice was at tipping point where the reduced albedo would start rapidly warming the planet which would in turn rapidly melt the last of the Arctic ice = calamity. Mother Nature seems to have it another way.....

A bit off-territory for this blog - but - I have mentioned it before.  This does seem daft at best and at worst - well, read David Rose's article and perhaps do a little research and make your own mind up. 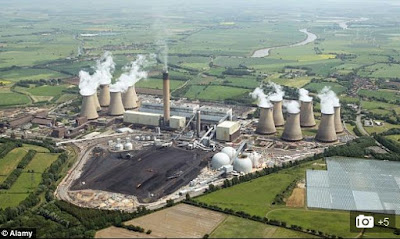 I have mentioned Drax before - and I will keep mentioning Drax - because it's a very prominent example of how innumerate (and utterly gormless) most of our public servants are - and how greedy, short sighted and subsidy hungry the large bureaucratic power utility companies are. As to the "environmentalists" who anoint this sort of folly with "Saving the Planet" - well..... they should be ashamed of themselves.

As I've mentioned before - the insane subsidy for burning wood to "save the planet" has actually driven up the price of construction timber - that simply does not seem right. This looks like Tulip mania.

EDIT: yet another waste facility has gone up in yet another major conflagration (fuel for waste recycling ??) - as Andrew Montford says: "with recyclers turning to ash at an alarming rate of knots you have to wonder if such pyrotechnics are not actually a bug, but instead are a feature of a system that bribes people to process low-value materials at high cost."

Windmills and their consequences

Windmills have their place.... It's easy to call people who resist these subsidy garnering items NIMBYs - but look at the video and ...
honestly - would you like your environment filled like that?


Bear in mind that each and every one of these items needs a fossil / nuclear fuelled backup generator running constantly - in case the wind stops. The electricity produced is actually more damaging to the environment than having a highly optimised gas turbine running at it's optimum efficiency...

Not a blot on the landscape and a folly of epic proportions?