It rather looks like a second Sheffield based EA water permitting centre manager (John Sweeney)  has left the EA under "unusual "circumstances...  (Dr. John Aldrick being the other)  and I'd say - left his paw prints all over things connected to Avoncliff.

When I was made aware of the applications for a new abstraction and a proposed extension of the 2014 "Tarrant" impoundment license I was quite surprised to see that Ms. Lee was named as the Weaver's Mill license holder.

The transfer procedure laid out on the EA's own required  WR165 transfer form appears to prescribe that a public notice is placed in the local newspaper of record (WR165 - Section 15). No such advertisement was placed. ( Wiltshire Times - Dec 2015, January 2016 or February 2016)

Yet again we have a license awarded under circumstances that the officials overseeing the dodgy transfer know to be very difficult to undo without recourse to Judicial Review. Water Resources Act 1991 S59A does not seem to have been adhered to. Even if discretionary powers mean that a public announcement can be deemed unwarranted - one might reasonably expect the owner of the other half of the weir to be informed as an "interested party"?

No doubt officials will claim this requirement to advertise is wholly discretionary - the language used in s15 of the transfer form seems to give the lie to that assertion.

If one reads the WR165 Section 15 - there would appear to be plenty of reason to actually refuse the transfer and revoke the license for non compliance with the condition of "Generation by Feb 2017" imposed as a condition of the 2014 "Tarrant" license.  The EA has refused transfers of abstraction licenses on much thinner pretexts than this in other places.

It would seem that the present application to extend was cooked up in January 2016 and it was known at that time that the requirement of the 2014 license to be generating electricity by February 2017 would not / could not be met and that a 10 month delay in applying for an extension  at the "11th hour" was adopted as a tactic - I'd suggest coached by an official seeking to unduly influence the outcome ... in order to further damage any prospect for North Mill to install / operate a generation scheme.

yes well...  I had a moan in the previous post about the availability of supporting documentation for the two recent applications by Weaver's Mill at Avoncliff - after a fair few phone calls and emails - a mission to Bridgewater seemed like the only way to actually guarantee sight of the relevant documents before the consultation period expired...

Sorry about running off with the visitor pass from Rivers House - I'll mail it back.....

It would appear that Weaver's Mill have applied again for a water license.

It took us 10 days to notice it - we'd expect zero courtesy from the EA in this.

True to form the Environment Agency - instead of - as most other public bodies do put it online - chose to play awkward .... and anybody wanting to see the application has a day out to Bridgewater / 100 mile round trip to be shown a selection of relevant documents - which from previous experience means that there is a chance that officials are hiding something. By the way - where is John Sweeney? - we see that his chum David Jordan (OBE no less!) is swanning around India.... 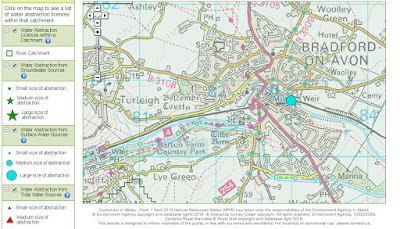 According to the EA's own abstraction database - there isn't even a license at Avoncliff to vary....


Were there pre-application discussions I wonder?  did the EA recommend an ATL turbine as installed at Kingston Mills? (eye-roll / head shake / LOL)


The terms of the application are quite "curious"...
- we aren't accusing anybody of anything...

and what's going on at Kingston Mill hydro ?

14 months after "installation" and no working turbine

About time somebody made a statement  - eh?


EDIT: The moribund Avoncliff license doesn't show on the EA's database as it's an impoundment not an abstraction ...  duh... my mishtake.
Posted by Tom at 00:30 11 comments