You might expect us to crow a bit about yet another  departure from the ranks of senior EA management - frankly I am actually disappointed, but - not surprised.

It took them quite a time to find and sign up Sir Philip Dilley as EA Chairman.Some people were not happy and perceived him as a traitor to the Green cause - one wonders if they will now crow about his departure and lobby for a proper Greenie to replace him. (EDIT the toxic twerpery has begun)

That a professional engineer with a substantial cv replaced a venal failed poet with a propensity to arbitrarily invent new types of rain was a bit of a surprise...

His demeanour at the parliamentary committee last week was not without a certain amount of scowling and I suspect there was some simmering anger in there somewhere (well controlled).

The fact that he arranged for cover in his absence and was no doubt assured by minions that it'll be OK - we'll cover for you... and was then promptly hung out to dry by a deliberate parade of lies from his own staff as to his whereabouts makes my conspiracy detector beep a bit....

As can be seen from the recent Sunday Times piece (£) on the EA - it has little shortage of self aggrandising gits who think an awful lot of themselves vying to promote themselves to the positions they want (and are "entitled to") it was always likely to be a poison chalice - but one does wonder if this involved daggers as well..... I wonder how long Sir James Bevan will last and if he's invested in a Kevlar waistcoat - him being an unwanted outsider 'n all....

jump / pushed?   - it would seem that the plain old screw-up theory of everything was at work here The Sunday Times has the story ....


However -  "Infamy! Infamy! They've all got it in for me!"  is still an attractive alternative :-)
I've wanted an excuse to use it like forever....

EA BigWigs up in Parliament

Well.... after all those departures

and some attention about payoffs in the Sunday Times -

The biggest wigs of The EA are up in front of Parliamentary Committee this afternoon : 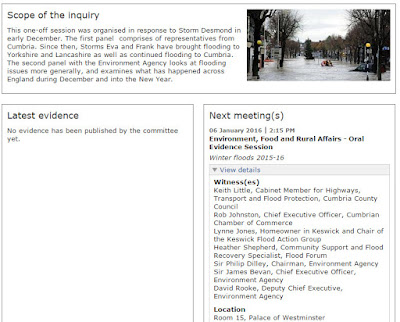 The Three Musketeers come on at 15:39 - drag the bar marker in the video window

In all,  a positive contrast to the previous regime - but answers lingered (understandably) on a certain amount of "catastrophic" events without  actually evidencing it.... the EA guys (and the committee members) could actually do a lot worse than reading and absorbing a few articles at notalotofpeopleknowthat  Exploring what happens in Holland regarding flooding would very likely be useful....

If you do know - we'd really like to know what happened - as do a number of people who've contacted us directly - some of whom wanted to resurrect the site and more...!

In the meantime - for our flood victim readership looking for some solace from the EA's self serving gobbledygook - a new(ish) organisation The Flood Prevention Society is giving voice to criticisms of the EA's water management - or rather lack thereof....